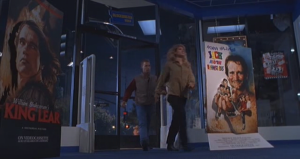 Check out the fake movie poster on the left hand side of the frame – long-haired Arnold Schwarzenegger starring in Shakespeare’s King Lear. Why oh why has that not been made?! It’d be awesome!

I’m such a fan of the original Jurassic Park that the shortcomings of this sequel are all the more painful. It’s one of those sequels that attempts to recreate (and outdo) all the elements that made the first movie succeed, but in doing so it becomes little more than a soulless imitation. The motivations of the different factions on the island are entirely uninteresting. I’ll admit that one raptor moment made me jump. The final act seems entirely superfluous – but then, in a sense, so does the whole movie. At least the cast – featuring lots of familiar names and faces – is good. Incidentally, this is one of the movies I have in mind when I refer to Julianne Moore as a ‘replacement actress’; she steps in to fill the gap left by Laura Dern. (Similarly, Moore took on Jodie Foster’s Silence of the Lambs role in Hannibal; in that case the replacement was even more direct as she was playing the same character.)