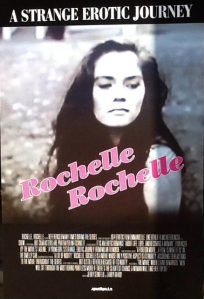 Easily the finest European film I’ve ever seen. The Village Voice called it “a masterpiece”, and I completely agree. It follows a young girl as she travels from Milan to visit her relatives in Minsk, but it’s about far more than her literal journey: the subtext is an exploration of the transformative power of physical connections, but beneath even that (a subsubtext, if you will), at its core, it’s a film about nothing at all.

Upon first viewing, some of the dialogue may seem cheesy (such as when the unnamed farmer character says to Rochelle, “Here, stand by the fire. Take off those wet clothes, you’ll catch cold”, and she replies “Oh, my hand’s so cold, I can barely get these buttons open”), but closer analysis reveals that the cheese is in fact the liberating kind; the kind of cheese a short bald man might want to bite into as though it were an apple.

The performances are all top-notch, particularly Frances Bay, who’s hauntingly brilliant in the title role. The farmer is played by an actor I didn’t recognise, but whose voice sounded almost like Larry David. Look for Eduardo Corrochio and Art Vandelay in small roles as two of Rochelle’s conquests.

There is a legitimate debate to be had as to whether the constant female nudity is gratuitous. For me, it was so central to the dialectic nihilism underpinning the narrative that it was neither gratuitous nor excessive in the least. It helps, of course, that Bay is so pleasing to the eye.

I’ve listed the director as Terrence Malick, though I should acknowledge this is an unconfirmed rumour. Bizarrely, the film has no director credit; could this be the ‘missing film’ in Malick’s career, made at some point in his 20-year hiatus between 1978’s Days of Heaven and 1998’s The Thin Red Line? I think we all know the answer to that question.

I really can’t recommend this film highly enough. Unfortunately, readers of this review may have trouble tracking down a copy; it still hasn’t received the DVD or Blu-ray releases it so richly deserves. Please join me in lobbying for a Criterion Collection release!

It’s good to occasionally see the world through someone else’s eyes – or in this case, through their eye, face, brain and skull.

The best space movie I’ve ever seen and a gripping experience from start to finish. The opening tracking shot, lasting an incredible thirteen minutes, establishes right from the start the technical wizardry on show and director/co-writer Alfonso Cuarón’s refusal to allow viewers to shift from the edges of their seats or peel their eyes from the screen for even a moment. Better yet, nothing – not even the teardrop that floats toward the camera in vivid 3D – is used for its own sake or just to wow us with beauty or how-did-they-do-that wonder; instead, all that wizardry is actually in service of a finely crafted survival story and a moving tale of a woman in crisis. I don’t normally like Sandra Bullock (and from talking to others about this movie, it seems I’m not alone in that) but she’s really great in this, somehow avoiding whatever it is that usually repels me and allowing me to (silently) cheer for her the whole way through. George Clooney is good too, though it doesn’t seem like much of a stretch for him as the character he plays is basically just Astronaut George Clooney. It’s quite short, a taut 90 minutes, but that length seems perfect and allows for a concentrated burst of tension and drama that might have been too much if stretched over two or more hours. The ending is quite beautiful. I saw it in 3D at IMAX, the way it demands and deserves to be seen. I imagine its impressiveness would be slightly reduced with every reduction in screen size, so much so that it would feel cramped and stifled on a television, though it should still work. If it’s somehow still playing at an IMAX near you, or it gets rereleased there, do yourself a favour and go check it out.

Wow. Probably the best movie I watched in 2013, a year in which I watched 365 movies. One of those movies that reminds me why I love movies – this is what they can be and what they can make me feel. I loved it so much I watched it thrice (once for myself, twice to share), and the second and third times through it hit me just as hard. A word of caution: it won’t please everyone, and some might find it baffling or plotless or pretentious, but I found it none of those things. It sung to me! Quvenzhané Wallis is an absolute revelation, and seeing her brilliance I was compelled to seek out and watch Silver Linings Playbook to confirm my suspicion that she was robbed at the Oscars (though really, it’s somewhat incredible that she was nominated at all). Great soundtrack too – I still find myself spontaneously humming it quite often.

Utterly beautiful meditation on loneliness, sadness, family, connection, friendship, ostracisation, childhood, and perhaps even mental illness. Deeply moving, frequently hilarious, and unlike anything I’ve seen before. At first it feels like someone decided to make a children’s movie with the style, skill, sensibility and soundtrack of an indie comedy, but it ends up being much more than that. Max Records, the child actor in the lead role, is superb; the actors voicing the Wild Things – led by the late, great James Gandolfini – are also excellent. It gave me so much to think about and had such pathos throughout. The tone is perfect. I can’t recommend this highly enough – but only for adults. Despite the furry creatures, this is not a children’s movie.

One of my favourite movies and a key piece of my childhood. It’s very hard to fault: thrilling, funny, impeccably well-paced, and full of fine performances and incredible special effects that still hold up. I love how many action / suspense / thriller moments Spielberg is able to throw in that DON’T involve dinosaurs – e.g. a jeep falling through a tree, an electric fence being switched back on, etc. – thereby ensuring we aren’t overwhelmed with dinos and they maintain their power. Rereleased in 3D at IMAX for the 20th anniversary, it’s never looked better and I’ve never enjoyed it more. Stirring John Williams music gets me every time. “Shoot her… shooooooot her!!”

Wow! One of the best films I’ve ever seen. It’s funny, gripping, deeply touching, entirely unpredictable, and very innovative in its direction. I can’t believe I waited so long to watch this! I think it probably isn’t for everyone, but I really loved it.