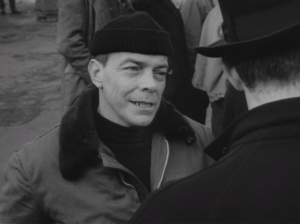 As this is so clearly Jean-Claude Van Damme, and the movie was made in 1954, I’ve written to Wikipedia to inform them of the inaccuracy of their claim that Van Damme was born in 1960.

Powerful drama about personal responsibility in the context of waterfront union corruption. The film is justifiably best remembered for Marlon Brando’s Oscar-winning performance, one that still holds up six decades later for its intensity, dynamism and depth of feeling. Apart from Brando, there are some other good performances, most notably Eva Marie Saint and Karl Malden. The famous car scene (“I coulda had class… I coulda been a contender… I coulda been somebody…”) is as moving as you’d expect, though it’s more understated than I’d been led to believe from my previous exposure to snippets out of context. The story is fairly predictable, as is the romance, but it’s still quite effective. Elia Kazan’s direction is nothing flashy, though it won him a second Oscar.
My Tweets