Terrible comedy about Japanese attacks, and other wacky hijinks, in California during World War II. The worst Steven Spielberg movie I’ve seen (full disclosure: I haven’t seen Indiana Jones and the Kingdom of the Crystal Skull!). Aside from a distinct lack of jokes that are actually funny, there’s a disturbing rapiness exhibited by a couple of the male characters that’s supposed to just be all part of the fun (spoiler alert: it isn’t). The nicest things I can say about it are that a couple of the action scenes were staged well and the cast isn’t bad (though none of them can do very much with this material).

Brilliant drama exploring what happens to a work-focused, inattentive father, and his young son, when his wife abruptly walks out on the family. Superb performances from Dustin Hoffman and Meryl Streep, and Justin Henry is also quite good as the little boy. The movie strikes a balance between simply telling its story and thoughtfully examining the broader questions at play in terms of parental responsibility, family law, what it means to be a parent and love your child, and the devastation that divorce causes. It’s deeply moving and has some very emotional moments, but it never feels exploitative. I loved both of the French toast scenes. Entirely deserving of its Best Picture win (even in a year that also saw the release of both Apocalypse Now and Alien) and several other major Oscars.

This was only my fourth Woody Allen film, after Hannah and her Sisters, Whatever Works and Midnight in Paris, and it immediately became my favourite of those I’d seen. Subsequently I saw several more, and it has maintained its top spot, though it’s now tied with Love and Death; they’re both equally excellent, but in quite different ways. As for this one: the dialogue sparkles, New York is shot beautifully, the three central characters are fascinating, and ultimately it’s quite moving. Did I mention how good the dialogue is? 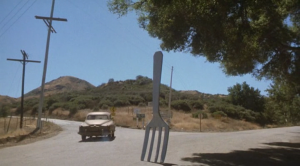 I suspect there’s a visual gag here, but I just don’t get it.

Funny first Muppet movie, but disappointing in comparison to 2011’s superior The Muppets. Some great visual gags, snappy dialogue and good jokes, but perhaps not enough of them. There are some definite lulls, and only some of the many celebrity cameos are worthwhile. Still, worth watching if you like the Muppets (and who doesn’t?).

Disappointing Herzog remake of the 1922 classic. The problem wasn’t that it was slow, though it certainly was that; the problem was that Klaus Kinski’s Dracula wasn’t scary or even menacing. Some nice scenery, and interesting use of Wagner’s Das Rheingold (a piece of music I associate with my favourite movie, The New World (2005), in which Malick opens with it) and rats.

Some of these credits are pure gold; “DENNIS WATSON (Gay) (“Yes, very”)” takes the cake.

Superb satire strains credulity but that’s kind of the point. It is a comedy, though as is often the case with Hal Ashby films, it’s not laugh-out-loud funny very often. Peter Sellers is flawless in a difficult role; much like Billy Bob Thornton in Sling Blade or Tom Hanks in Forrest Gump, everything depends on him getting it just right so we can go along for the ride, and he nails it. At one point, when Richard Dysart’s character starts asking questions, I feared the spell would unravel and everyone would discover the truth, but thankfully that doesn’t happen. The outtakes in the end credits, which I’ve read Sellers hated, only increased my joy after the glorious closing moment. A real gem, made somewhat tragic by Sellers’ death seven months after its release.

Bold and exciting foray into post-apocalyptic chaos, Aussie style. The action scenes are good, the tone is perfect, and Brian May’s score is a huge plus despite initially sounding incongruous. Mel Gibson is fine in this iconic role; Steve Bisley also does well in support. My main criticism of this, particularly in comparison to Mad Max 2, is that it takes a while to get going; the exciting vigilantism so strongly associated with the movie and character really only kicks in in the final fifteen minutes or so. It’s fascinating to consider the impact this movie (and the series as a whole) had on subsequent depictions of post-apocalyptic societies and worlds (e.g. the Fallout and Borderlands games).